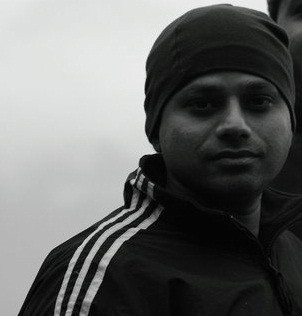 Vishwadeep is an adventure traveler whose passion lies in traveling across places. His special interest lies in exploring places which are difficult to reach for most of the people. He firmly believes in "Romancing with nature is the best way to indulge oneself with God’s creation and the best way to romance is to travel".
Capturing exotic moments during the affair with nature is the best way to show respect to the Creator. The memories of travel remain in our minds but it needs to be shared with others to tell them how exciting the travel was and what we saw during the travel. Images taken during travel are the best way to tell travel stories.
Traveling is fun but it also has its own challenges. Vishwadeep has survived extremes in his search for unexplored places. From surviving as low temperature as -44 degree Celsius to crossing places which has landmines at every 500m to visiting islands where only 180 natives stay to sleeping in his tent amidst dense jungle to alpine trekking for 13 days without sign of any single human being. On many occasions, he had to eat things without knowing what he was eating, and on other occasions he ate well aware that a sensible human being will never eat anything which crawls, wriggles, walks & flies; and yes, on odd occasions he had to eat raw also. Traveling not only tests physically but also mentally & psychologically. However, the feeling of seeing with own eyes the beauty of earth is what keeps Vishwadeep live.
Vishwadeep is a certified deep sea diver (CMAS 3*), River Rafter, Rock Climber, Kite Surfer and martial art expert. He is also into biking, alpine trekking, camping, mountaineering & survival living. He keeps himself fit through Yoga, Meditation and Resistance Training.
He uses Nikon D40 for wildlife & macro, Canon Mark III 5D for travel and GoPro Hero for adventure photography.
He stays in Bangalore, India. During his free time, he teaches kids rock climbing.
© TRAVELIMAGES.in
Powered by ZENFOLIO User Agreement
Cancel
Continue